While flocks of geese noisily announced the arrival of chilly November days in the Cumberlands, there was yet another scene that caught the attention of area residents. Colorful yellow aprons filled with Tootsie Rolls, accompanied by smiles, caring hearts and a generous community became a familiar scenario as members of the Crossville Knights of Columbus and their volunteer helpers donned their yellow aprons and shared hundreds of Tootsie rolls with area donors during their annual November MR Drive.

Direct Questions To These Officers and Directors 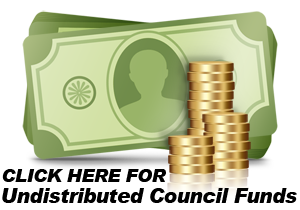